Activated charcoal is marketed as a way to cure hangovers. The idea is to digest enough carbon through supplementation that the compound will soak up metabolites and toxins from the blood and help you with your hangover. The problem is it doesn’t work. 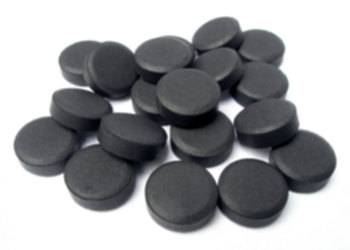 Activated charcoal is a type of carbon that has been processed into a form with a very large surface area (for a molecule). Physically, it is a fine, black powder with no taste or odor. It has a high degree of “micro” porosity. It is usually made from coal (using high-temperature treatment) and sometimes it is impregnated with chemicals to alter or enhance its absorption properties. In the scientific study Adsorption Equilibrium and Kinetics of Gasoline Vapors onto Carbon-Based Adsorbents researchers measured the adsorption kinetics of ethanol on pitch-based activated carbon fibers (ACFs) at different adsorption temperatures ranging from 27 to 60 °C. The mass uptake of ethanol adsorbed on ACF was measured using a thermogravimetric analyzer and the concentration range observed was 0.1 and 0.5 grams of ethanol to gram of ACF; in other words, the adsorption rate is mainly controlled by surface diffusion.

I know… you probably didn’t come to this website for a science lesson… but basically, in short… the absorption isotherms are a function of absorption, contact time, and competition or cooperative (enhancing) effects from other substances. There are also other exchange rates that need to be considered, like the reverse reaction for the association constants that define formation, etc., etc. If you don’t feel like clicking through to the research provided, the summary of findings is that it would take a LOT of this stuff to absorb liquids that only bind modestly (liquids like ethanol/alcohol).

In medicine, carbon is sometimes used to treat overdoses following oral ingestion of complex molecules (e.g. morphine, strychnine, etc.). Charcoal works here because these compounds bind much “tighter” than alcohol. A dose is usually given at 1 gram/kg of body weight (for medical applications 60-90 grams [1 pound = 453.59237 grams], ~1/8 of a pound).

Certain patents have made the claim that charcoal can have a positive effect in reducing the sting from a hangover. However, the science used here is now considered obsolete. New research, such as Activated charcoal in oral ethanol absorption: lack of effect in humans (done on humans) reports no significant difference in alcohol absorption in those observed. In this study, six healthy young adults drank a dose of ethanol designed to give a peak concentration of 125 mg/dl (0.12%) on two different days after overnight fasting. Each individual drank the same amount on both occasions; but on one of these days, the subjects drank an aqueous slurry of 60 grams of super active charcoal prior to ethanol ingestion… 60 GRAMS!!! They compared the pharmacokinetic profile of ethanol with and without activated charcoal treatment. The fraction of ethanol absorbed was similar on both protocols. The mean peak ethanol concentration after pretreatment with activated charcoal was 8% greater than ethanol alone (p = 0.08).

A follow up study, Does alcohol absorb to activated charcoal? , was done because of interest in various dog studies. The researchers wanted to study whether charcoal is of value in a clinical situation. A randomized cross-over study in two phases was conducted where each dog drank 88 gram of alcohol and 30 minutes after either got 20 grams of charcoal or were given water to drink. The study concludes there were no significant differences in plasma alcohol concentrations with or without charcoal.

In a later study — The effect of “superactive” charcoal and magnesium citrate solution on blood ethanol concentrations and area under the curve in humans — eleven healthy males between 21 and 37 were enrolled into a non-randomized crossover study comparing super-active charcoal (SAC) given after alcohol consumption. After receiving 0.6 gm/kg of ethanol their blood was sampled. “Area under the curve” (AUC) was calculated and the highest ethanol level was recorded. After a minimum of 1-week washout, the volunteers ingested an identical ethanol dose, but in addition, received 60 grams of SAC and 300 ml of 5.8% magnesium citrate solution between 1 and 3 hours post ingestion. It was concluded that super activate charcoal in the dose used was not effective.

Based on studies, activated charcoal does not work to cure hangovers in humans. Additionally, there is a significant lack of proof that activated carbon is effective in minimizing alcohol intoxication.

Brendan, that’s a fair question and the answer is unfortunately that it’s probably not effective, and there are certainly things that are more effective. This is supported by limited research (Adsorption of whisky congeners by activated charcoal. Chemical and clinical studies related to hangover). Also, I believe the spirit of your question is that you would like to take this stuff and keep partying, so note the recommended dosage is between 50 to 100 grams when treating issues of toxicity (source: WebMD | Activated Charcoal) — this simply is an impractical approach to treating a hangover. There are better supplements… Read more »

How I Reintroduced Alcohol - Critical MAS

[…] charcoal idea I got from Dave Asprey, which turns out like much of the nonsense he spews is probably wrong. Even if both of these did nothing to help me, the raw carrot is still nutritious and the charcoal […]

Personally, activated charcoal has cured me of hangover symptoms and digestive issues after eating processed or greasy foods. It doesn’t ABSORB anything, activated charcoal only ADSORBS – attracts elements to itself. No, this is not effective with alcohol, the alcohol will pass through your body on it’s on. As for the headache, upset stomach, nausea, bloating, fatigue, etc. that comes with the hangover… it will make the symptoms go away. I took 1 tbsp after a night of heavy drinking, my bf didn’t and his hangover lasted all day and he had to take a nap. Whereas I, was hopping… Read more »

I suspect that for people with a CBS gene mutation, especially CBS C699T, charcoal actually helps to ease their hangover by dealing with excess ammonia and other painful by-products.

[…] Whether activated carbon can effectively bind to alcohol is indeed asked ​​from time to time; however, neutralized coal has been shown to move waste products of alcohol, especially from low-grade alcohol from the gastrointestinal tract […]

• 12.9.2019 – Learn from Mike about how to have more fun from his guest spot on The Impact Entrepreneur Show

• 12.2.2019 – On The Gratitude Podcast, Mike discusses how fun helps us appreciate life more

• 9.19.2019 – Mike is featured on Self Improvement Daily discussing the value of having a bias towards fun